We have published an expert’s report and revealed previously unseen images of the cetaceans from the other MarineLand, located a stone’s throw from Niagara Falls in Ontario, where there are belugas, dolphins, and an orca stagnating in small, dirty tanks. Kiska has been alone for ten years. Animal welfare is so badly flawed that the problems being reported a decade ago are still unresolved and are getting worse! Yet another scandal in the captivity industry.
We wrote to Isabelle Hudon, Ambassador of Canada in France as well as Sylvia Jones, Solicitor General of Ontario and Paula Milne, Ontario's chief animal welfare inspector, and sent them the report.

Just before its annual closure for several months, one of our investigators returned to the other MarineLand in Canada to see what state the cetaceans were surviving in. Kiska was subjected to enforced isolation for years and was going round and round in a tank that was tiny in relation to her size and swimming capability. What will their lives become, being hidden out of sight for the entirety of the Canadian winter?

When our investigator went back, the images and information collected were sent to Dr Ingrid Visser, a marine biologist who specialises in orcas, to create a report on Kiska’s state. According to the researcher who had visited MarineLand in person in 2015, 2017, and 2018, and had also received our images from 2021, the conditions of confinement, behaviour, and also the physical state of the animals were so worrying that the report covers much more than just the isolated and neglected orca as we had initially planned.

The quality of the water (page 55), the size of the tanks (page 43) and the general upkeep of the park are questionable. The mental and physical state of the animals is detrimental and has been for years

The cetaceans are all exposed to extreme welfare issues. All of them show stereotypical behaviours (in other words abnormal and/or repetitive behaviours).
Many of the animals have injuries, of which many are probably the result of self-mutilation behaviours and/or attacks and/or injuries caused by the tanks.

Kiska’s solitude and overcrowding for the belugas

The belugas are on top of each other and, inevitably in such conditions, are subject to attacking. They go round and round in circles, so much so that, like Kiska, their profound mental and psychological problems are also shown as physical problems. Some of them have teeth worn down to the gum, deformed bodies… In the tanks in the show auditorium, there are two sealions, five dolphins, and two belugas. These animals should not share the same tank system as the temperatures required for each species are completely different (mild for one, freezing cold for another). What’s more is that the latter are made to carry humans on their heads (page 29)! The dolphins’ skin is raked with bite marks, specific to being confined, and they are kept in a miniscule tank. As for Kiska, she spends her day idling, skimming around the sides of the tank always in the same direction. So much so that her dorsal fin is collapsing, typical of her having a health problem and a lack of exercise (page 5). Sometimes she exhales underwater to make bubbles, and often, near the “beach” in the tank, makes waves so strong that we think she hits her head on the glass (page 15). This is to keep herself occupied. For the three days that our investigator was there, at no point did the park make any enrichment available to Kiska to cure her boredom. Only mealtimes break the monotony of the days passing by. We were able to film them cleaning her teeth, which are in a pitiful state incidentally, almost comparable to Inouk’s in France… many of her teeth have been gnawed down to the flesh (page 7), which is just as painful for orcas as it would be for humans. This is the result of years in captivity: gnawing at the edges of the tanks, regurgitating numerous times due to stress, and not even using them to eat (everything is poured directly down their throat) (page 9). Furthermore, even care is given in a questionable way: a Betadine-type liquid is sprayed onto their teeth and runs down their lips (page 8)… but this liquid should not be ingested under any circumstance, which is inevitable! Ingrid Visser’s report further revealed that an open wound that she had on her tail for nine years has still not healed (page 14). That’s just life in a dolphinarium.

The annual closure of the dolphinarium is a critical moment because no external witness is able to reveal any problems. We are very worried about what might happen to Kiska and the rest of the animals locked up behind closed gates at MarineLand Canada. We have not forgotten the tragic fate of Femke and the other dolphins sent from Parc Astérix (in France) to other European dolphinariums last year to continue to be exploited.

A dilapidated dolphinarium in need of restoration? What about the animals?

Everything shows that the dolphinarium is deteriorating and that no investments have been made for years. Around the tanks and near the bear enclosures, there are numerous seagulls looking to grab what’s left of the belugas’ food from their “educational demonstrations” or what’s left of the brown bears’ food that has been distributed by visitors all day long. Droppings are spread all over the place and not cleaned up from one day to the next. On the edges of the tanks, on the ground, everywhere (page 38). There is a risk of numerous illnesses being transmitted to visitors and to children. The bears mope around in their enclosure, most of them stay away and even turn their backs on the visitors in a futile attempt to forget where they are. Two or three of the big eaters take a bath in front of the park’s clients who throw them food that they’ve bought at the kiosk just before.

The walruses, including Smooshi, previously one of the park’s attractions, have disappeared. What has happened to them?

Under the tanks, large dirty windows allow you to see the cetaceans. There are leaks everywhere and mud and algae grow at the joints. Signs indicate that the leaks are safe and that they should resolve on their own… the same signs photographed years before show the opposite is true (page 36)! Who are we kidding?

One of the signs, with attendance at half capacity (the few open rides are pretty much empty and so are the pathways), shows that the current owners may be looking to sell the park, including the animals. What will their fate be?

According to a local source, some of the most famous companies worldwide in the entertainment industry could be among the potential buyers… but this information remains to be confirmed.

The number and the scope of the violations of Ontario Regulation 444/19 (NB: page 59) on animal welfare are considerable… it is recommended that the cetaceans are moved as soon as possible to a proper sanctuary by the sea.

There is a petition to free Kiska online. We are counting on you. 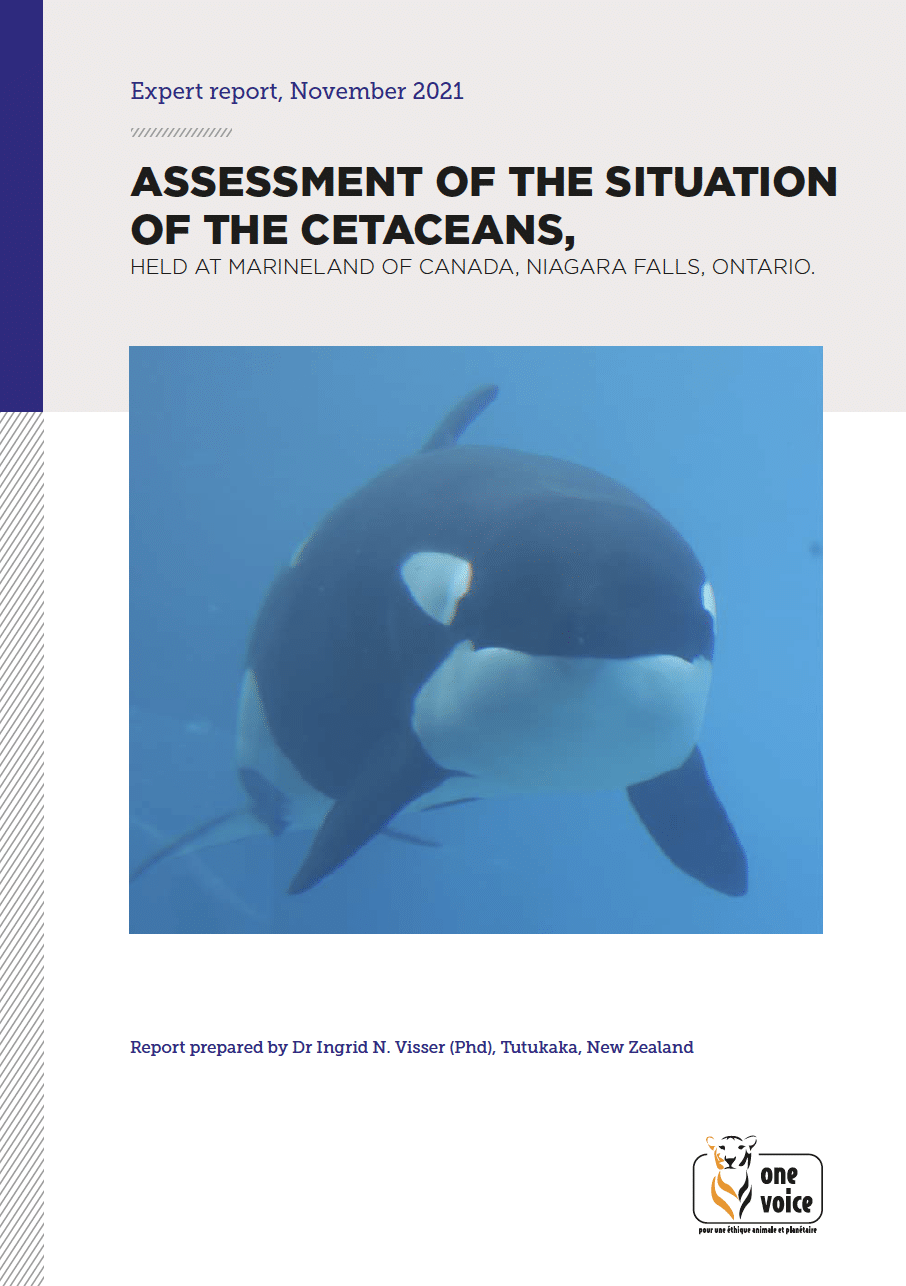 Assessment of situation of the cetaceans, held at MarineLand of Canada, Niagara Falls, Ontario.

Read the report
Go to Top